The most common reason for avoiding yeast products is to reduce or eliminate symptoms of a condition known as candida albicans overgrowth, which can cause yeast infections in the mouth, gastrointestinal and urinary tract, as well vaginal thrush but it can affect men too. Candida overgrowth can cause a wide range of symptoms throughout the body because the microbe is always present in the skin, on mucous membranes like the mouth and digestive tract. Symptoms can include joint pains, fungal infections of the nails and skin infections like athlete’s foot, itching and genital discharge, flatulence, diarrhoea and constipation.

Unleavened baked goods have been made for centuries and are so easy to make at home. There are plenty of added ingredient options you can add to this basic mix to vary the recipe. The scones freeze well and are useful to have as an accompaniment to soups, pasta and stews, or put in a lunchbox. 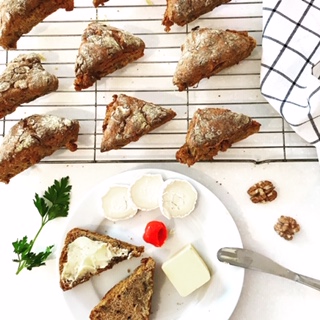 1. Steam the sweet potato over simmering water for about 10mins until completely soft. Remove from the heat, transfer to a bowl and mash until smooth. Put in the refrigerator to cool for 15mins.

3. In a large bowl, mix the flour, bicarbonate of soda and salt. Rub in the butter until the mixture resembles coarse breadcrumbs. Add the crumbled walnuts. Mix the water and vinegar together and add 3tbsps to the sweet potato to cool it further, then mix in the beaten egg. Add to the flour mixture and toss with a fork. Gather the dough into a ball, adding more of the vinegar water mixture, a tablespoon at a time, if the mixture is too dry.

4. On lightly floured greaseproof parchment or baking parchment, roll out the dough to a 14 x 21cm rectangle, about 2cm thick. Cut into 6 squares then cut in half again so you have 12 triangles, or use a 5cm pastry cutter to cut circles, re-rolling dough remnants until finished. Place on a baking sheet and bake for 12 – 15 minutes or until golden.